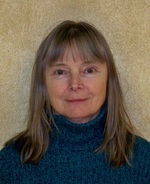 I have advocated for the Civic Auditorium restoration and the Festival Theatre in many different ways over the past 25 years, and this was the year the two efforts intersected nicely for me and the board.

I have been an art maker and business owner in SCF for 29 years and have firsthand knowledge of the regional arts consumer. I have volunteered for several projects, boards, and committees that pertain to the environmental, historic, and cultural preservation of the St. Croix Valley, and have attended or presented  at a variety of related conferences, charettes, and workshops.

The show that left the greatest impact on me was one produced in 2004 called There Shall Be No Night, a Pulitzer Prize winning play by Robert Sherwood about the invasion of Finland by Russia in 1938-1940. It was a perfect fit for our stage, our cast, and our audience.

I have been in love with Festival Theatre and the lovely St. Croix Valley since 2002 when I joined the company as an actor and director. During my four seasons as Managing Directing (2002-5) we produced 21 plays and increased revenue 230%. During that time I met my wife Kelly (White) Baer who some may remember from her six seasons as company manager/stage manager. It makes me very proud to think of what we created together in those days.

After leaving the region and earning my Master of Fine Arts degree, I have returned to direct six productions including A Streetcar Named Desire, Man of La Mancha, and A Funny Thing Happened on the way to the Forum. I am currently and a professor and theatre maker living in Northwest Indiana just outside of Chicago.  I am co-founder and president of Gary Shakespeare Company as well as a freelance director at various theatres around the Midwest.

I joined the BOD in 2016 to facilitate the Executive Director search and was very proud to be part of bringing Jason Richards to the Valley.  I feel the Festival Theatre is thriving and has an upward trajectory.

Deb Kravig (President-Elect)
​I moved to St Croix Falls in my mid twenties to enjoy the outdoor recreational opportunities in the scenic river valley.  I was employed by the regional hospital for 10 years as a Registered Dietitian until opting to be a Stay-at-Home mother.   I served in several capacities for the City of St Croix Falls including two terms on City Council. In my work with the city I participated in the process to save and preserve the historic Civic Auditorium which was home to the St Croix Festival Theatre. Not only did I enjoy attending the drama and music performances over the years but I have been impressed by the Festival Theatre's continuing commitment to arts education. The theatre provides educational opportunities for children and young adults in theatre productions, art camps and professional internships. For over 30 years the Festival Theatre has been fulfilling its mission to make the performing arts welcoming to all people and this is why I am pleased to be on the Board of Directors.

Emma Kravig (Director)
​Emma Kravig, a twin-cities based costume designer, joined the board in 2018 after being involved at Festival Theatre throughout her life. She participated in the Educational Program as a child and benefited from the Intern Program as a young professional. She has recently designed for multiple shows at the Festival Theater. Emma enjoys supporting access to performing arts in the Saint Croix Valley, especially for children and young adults. 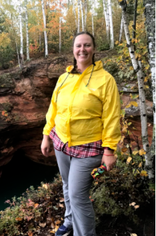 Amanda Wicklund (Director)
Amanda teaches English at Osceola High School, where she coaches the speech team and leads a project-based learning program called “Why Wait!” where students are encouraged to identify and tackle a wicked problem in the world. Over the past 20 years, she has served in educational theater in various roles, including directing, writing, and costuming. Her husband Karl, and three children Anika, Hazel and Violet are also deeply involved in theater, both onstage and backstage. In her spare time Amanda enjoys biking and hiking, especially on  the Gandy Dancer Trail, and acts as the membership coordinator for Friends of the Gandy. She also loves traveling, baking, history, is an avid reader, and serves on the board of the Osceola Public Library. ​